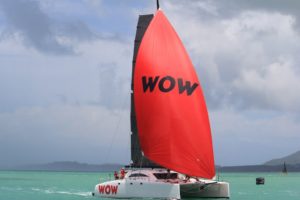 A SUCCESS STORY IN PHUKET, THAILAND

With fantastic weather Phuket is a great place to live; more so if you are into sailing with some of the best cruising grounds in the world plus a good sprinkle of regattas throughout the year.

Asia Catamarans kicked off in Phuket, Thailand in late 2012 when Australian Alan Carwardine, who was already living in Phuket, completed his employment with the UK based company Lewmar as the Asian area manager and joined forces with Swiss born Roger Diggelmann who had been running his own boat yard, Composite Yacht Constructions for 12 years in Phuket.

Alan is the designer behind Stealth designed catamarans as well as the many super fast Stealth Sports boats (monohulls) in Australia.

To kick start the new company Alan set about designing a new range of Stealth cats with more modern looks and fine tuning of the many areas that make for a good, user friendly and very livable but particularly fast cruising cat.

The new range incorporates the important original concepts of :

# Absolutely fun to sail, super responsive and more like a sports car to steer.

# Twin helms with excellent vision, traveller track and dinghy davits up on the solid and large cockpit roof giving an uncluttered cockpit with few ropes.

# Maximum air flow for the tropical conditions with large vent tubes from under the trampoline into the main berths,

# Drop down and disappearing windscreens

# Internal steps that allow you to walk thru the windscreen frame, past the mast and onto the foredeck.

There are now 15 sailing cats and 5 power cat on the water.

The sailing cats range from the very fast semi race/semi cruising Stealth 11.8’s to a fully fitted out and live-board Stealth 13c charter cat with all the bells and whistles; Or the Stealth 13s, a faster more basic 13 metre version plus a fast world cruising 14 metre now 3/4 of the way around the world with well over 35,000 nm under her hulls.

A new Stealth 12.6, ‘Fez’ designed for live-aboard charter and sailing courses for Java Yachting, our 1st repeat customer and Alan June Carwardine’s 4th Stealth cat. This time a very fast 12.2 Stealth, ‘Coconuts’ that is fully fitted out for serious cruising. The boat has a set of cruising sails and a set of racing sails and came overall 2nd in her 1st regatta, the Jai Dee regatta organised by the Phuket Yacht Club.

Launched to date in the powercat range is the 44ft power cat ‘Rendezvous’ which has had a very successful charter life carrying 22 guests and 3 crew with a max speed of 19 knots and a cruising speed of 15.

It is hard to believe but these speeds are achieved with a pair of 60hp outboards only so fuel consumption is very low, a big winner when chartering. To achieve such fuel economy a lot of effort went into reducing windage and reducing weight. With empty tanks, Rendezvous weighs 3.6 ton.

2 new Stealth 47 ft powercats, Infinity and Maserati, the largest the company has designed and built are also out there working within the day charter industry carrying 37 guests and 3 crew with a max speed of 23 knots and a cruising speed of 18.

The latest 47 ft powercat ‘Sea Explorer’ has also been working hard in the charter industry. Sea Explorer is equipped with all the mod cons for high end diving charters or a live-aboard for up to 7 passengers and 2 crew for periods of up to 10 days.

All 3 Stealth 47 powercats are fitted with a pair of 140 hp outboards on a lifting mechanism thru a well in the hull.

The 1st Stealth 36e powercat, ‘Hot Chilli’ was ordered thru the brokerage Multihull Solutions for local charter company Far-away Yachting. This small powercat is packed with space and ideal for economical charter work carrying 16 guests and 2 crew. Hot Chilli can cruise at 15 knots with a full payload with a pair of 60hp outboards fitted.

A new Stealth 13.2, ‘Vela’ is soon to be launched for Brisbane couple Emma and Nick Lyons. The boat has been designed and built for circumnavigation but still has all the go fast gear ready for doing the odd regatta.

After sea trails the boat will be shipped into her new home between Brisbane and The Gold Coast.

Asia Catamarans are also well into the building of a Stealth 12 to be shipped into Italy and a Stealth 13s to be based here for some local cruising before being sailed or shipped back to Europe.

The 3rd Europe boat on the order books will be started later this year for English couple Mark and Niobe based in northern Spain.

There is a full carbon Stealth 12.2 race cat also ordered by a Hobie world champion many times over. This machine will be based on the Gold Coast, Australia.

One of the most exciting Stealth’s on the order book is a fully electric, solar 40 ft powercat to be shipped into New Zealand. There is a certain amount of secrecy about this ‘new technology focused’ powercat ordered by a guru in this field so watch this space!

Very recently a new order for another Stealth 13.2 has been received for a Mackay, Australia based couple. Production is planned at the end of 2021.

Such a full order book is a true testament to the ongoing success of Asia Catamarans and their very much appealing Stealth cats.

Race results and other news

The all carbon Stealth 12, Cosmo that was shipped into Sydney  in late 2018 now has new owners, The 18ft skiff legend Trevor and wife Gail Barnabas.

Trevor and Gail intend to do as many Australian East Coast regattas as possible with as much cruising in between.

Two Stealth 13s’ have been built to date with both boats enjoying some racing success with Phantom V winning the King’s Cup and recently winning the 2019 Multihull Solutions Race Week followed by another win in the Cape Panwa Phuket Race Week. These newish designs follow on from the very successful Stealth 11.8 cats such as Hurricane and Java both achieving excellent OMR results. The 13s ( performance version)  has slightly more sail area but a metre taller rig, longer, slender hulls and carries a lower OMR than the Stealth 11.8’s??  Why they area a weapon on the race track.

The Stealth 13s, Phantom V is still based in Phuket while the owners continue to enjoy great cruising amongst their regatta sailing. Eventually the cat will be sailed to Ballina, NSW as her home base. Another stealth to watch out for in the SE QLD regattas in the future.

To date 6 King’s Cup regattas and 6 Phuket Race Week regattas have been won by a Stealth cat with many more regatta wins and podium finishes since the Stealth cats first started hitting the water 9 years ago.

The original Stealth 12 ‘Cut Snake’ is still doing well on the Australian race course winning the 2013 Brisbane to Gladstone Yacht Race and the Stealth 12.6 ‘Sidewinder’ now called Nautilus and based in Darwin won the Darwin to Ambon Race a few years back and has been continually cruising thru the Indonesian waters..

The Stealth designs have been dominating the Asian regattas in recent years and there seems no reason why this will not continue into the future with more Stealths and new Stealth designs on the race course.

The Stealth 13s ‘Top Cat’ and now called ‘LeVi’ has moved onto her new home in New Caledonia after being sailed to Singapore, shipped to Brisbane and sailed onto New Cal.

Galeforce has been sold, cruised most of Indo for 18 months and soon to be back in Phuket.

The Stealth 12 Motor Sailer ‘Integos’ is enjoying great cruising and lifestyle in the  med after being shipped into Turkey.

The very fast Stealth 11.8, ‘Hurricane’ is being enjoyed by her new owners in San Diego.

The Stealth 14GT ‘Wow’ is still in Covid lockdown in Tahiti after leaving the Panama canal and sailing across the Pacific. Eventually Wow will sail back to Phuket completing her circumnavigation. Many great stories abound from owners David and Helen including winning the Heineken Regatta in Antigua 2018.

Solar electric Stealths for the future

There has been a lot of focus on electrical propulsion recently which due to gains in technology is no doubt slowly becoming more viable.

Asia Cats has had many inquiries and been down the road of development in this field always to come to a brick wall mainly due to the high costs involved or the uncertainty of the unknown so it is great to now have on order the 1st truly electric 40ft powercat that will be built in conjunction with a NZ based company, experts in this field.

New ideas and designs, new techniques and new materials continue to become available to all boat designers and builders. This ideology is the way forward for any business leaving little room for complacency; a key to the success of Asia Catamarans.